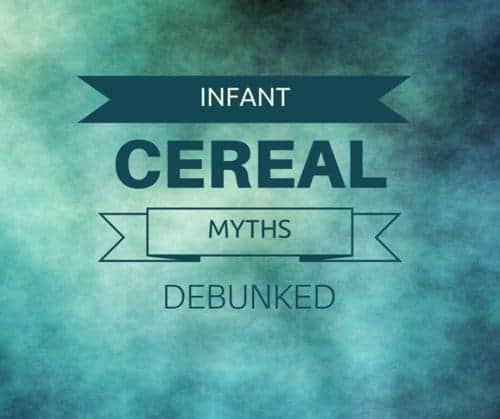 Welcome to Part 7 of my 8 part series: A Dietitian’s Guide to Infant Cereal.  My goal in writing this series is to provide you with the education you need about these cereals to make an informed choice about when and what cereals you’d like to feed your baby.   To stay connected with me and receive updates on this series, subscribe via RSS, or like Smart Nutrition on facebook!

Part 3: The Pros and Cons of Infant Cereals

Part 4: Can Babies Digest the Starch in Infant Cereals?

What every parent would give to find an easy way to get babies to sleep longer! Adding cereal to a baby’s bottle doesn’t do it though. This study involving 106 infants compared a group of babies who were given 1 tablespoon of cereal for every ounce inter bedtime bottle and a group of babies who didn’t get the cereal added to their bottle. Parents then recorded how long their babies slept. There were no differences in duration of sleep between the two groups!

Adding cereal to a baby’s bottle can actually result in harm. The thickened texture poses a higher risk for aspiration: the medical term for breathing in foreign material. Babies are also primed to consume a specific volume of food. Infant formula is designed to mimic the concentration of calories found in breastmilk. Adding cereal to either breastmilk or formula may override a baby’s natural ability to regulate how many calories they take in.

NOTE: there are certain medical indications for thickening a baby’s feed. Please follow the advice of your pediatrician.

MYTH: The major Health Organizations no longer endorse that parents give their babies infant cereal.

When the major health organizations in North American revised their infant feeding recommendations to include meat and other high iron foods, infant cereals got lost in the shuffle and some people thought they were no longer recommended. Not true. They are still one of the recommended first foods for all these organizations:

Constipation can occur when babies don’t get enough fluids or fibre. If a baby is given A LOT of infant cereal made with refined, white rice, constipation could occur. But this is generally not a concern for a baby who’s fed a variety of foods including fruits, veggies, and whole grain infant cereals, and who is drinking enough fluids. Once a baby starts solid foods, she should be offered water at mealtime and continue to breastfeed or formula feed on demand.

It’s also worth discussing what true constipation is for an infant. If your baby’s bowel movements are 4-5 days apart but the stool is soft and easy to pass, then there’s no problem! But if your baby is straining when having a bowel movement and the stool is hard and pellet-like, this could be a problem.

Nope. Single grain infant cereals with no added fruit contain NO SUGAR. Check out this article for more details.

Yes, they can! Check out this article for more details.

Part 3: The Pros and Cons of Infant Cereals

Part 4: Can Babies Digest the Starch in Infant Cereals?