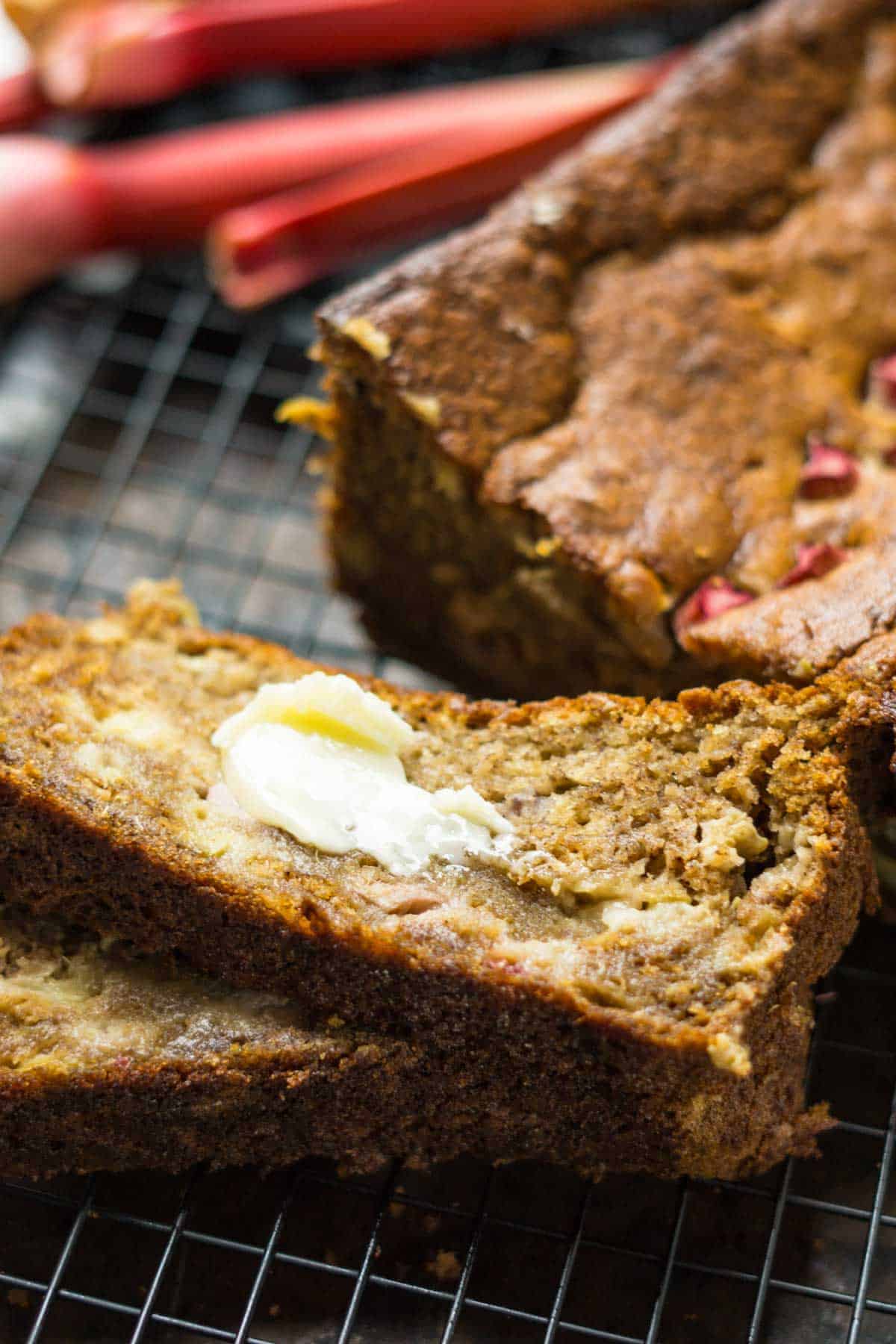 An incredibly moist banana bread whose sweetness is balanced by the tart addition of rhubarb.

I’ve discovered the best way to do recipe testing.

Get you guys to do the work for me!

Just kidding. But you lovely readers really helped me out with this recipe! I posted a pic of my first attempt at rhubarb banana bread on Instagram and had so many people ask me for the recipe. I knew the recipe needed work so I quickly made another loaf, which I thought was perfect. But I’m just one opinion. Then I sent the recipe to anyone who needed it asap to use up rhubarb sitting in their fridge.

A few people made it and got back to me right away with reviews such as….

“The banana rhubarb bread was unreal!! I’m copying the recipe into my personal cookbook right now!!”

I swear I didn’t add those extra exclamation marks in; those were legit in the review. 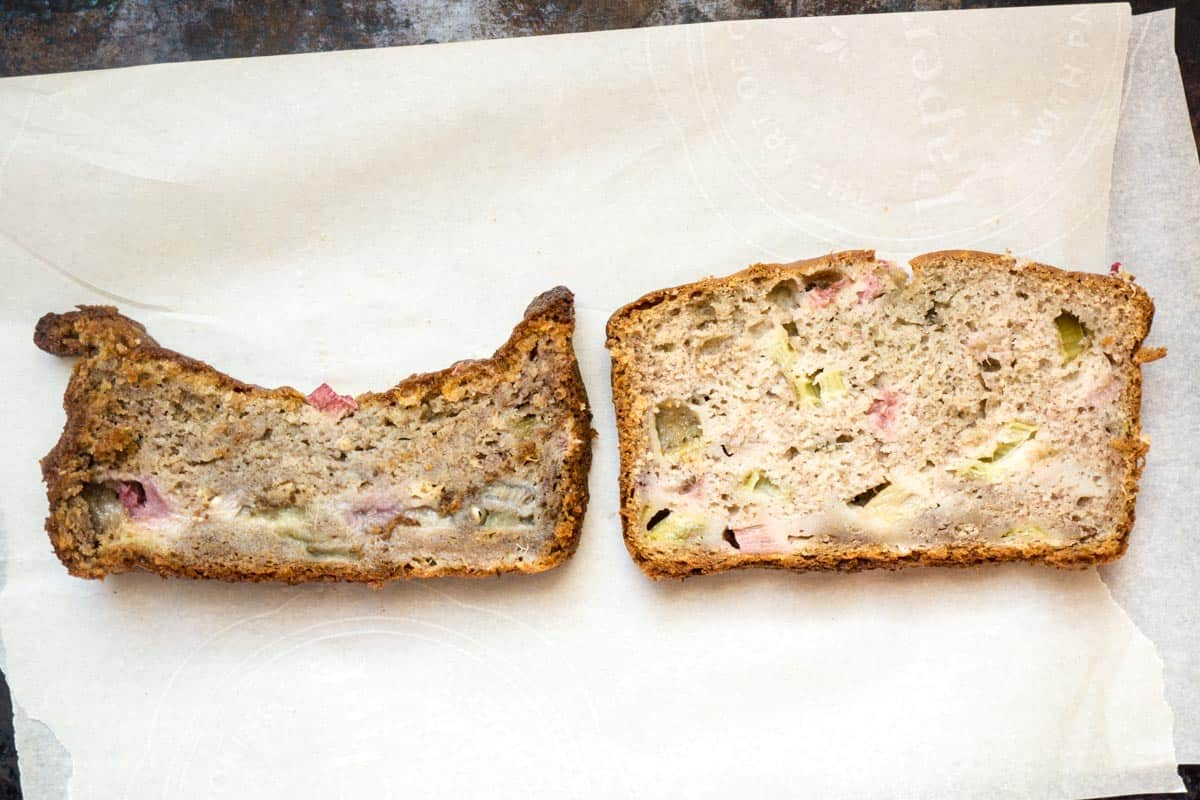 You can see from this photo why I needed to work on the recipe after the first attempt. On the left is the first loaf. While it was extremely tasty, it was an aesthetic flop. I was going for moist so I based it off Ricardo’s Ultra Moist Banana Bread but it was just far too moist and floppy. The poor thing had no chance of rising to success. It also needed MORE rhubarb. You can eat banana bread all year long; when it’s rhubarb season you gotta have the taste of rhubarb shine through!

The second loaf (photo on the right) was still very moist but it held together like a bread should and was the perfect balance of rhubarb to banana flavour. 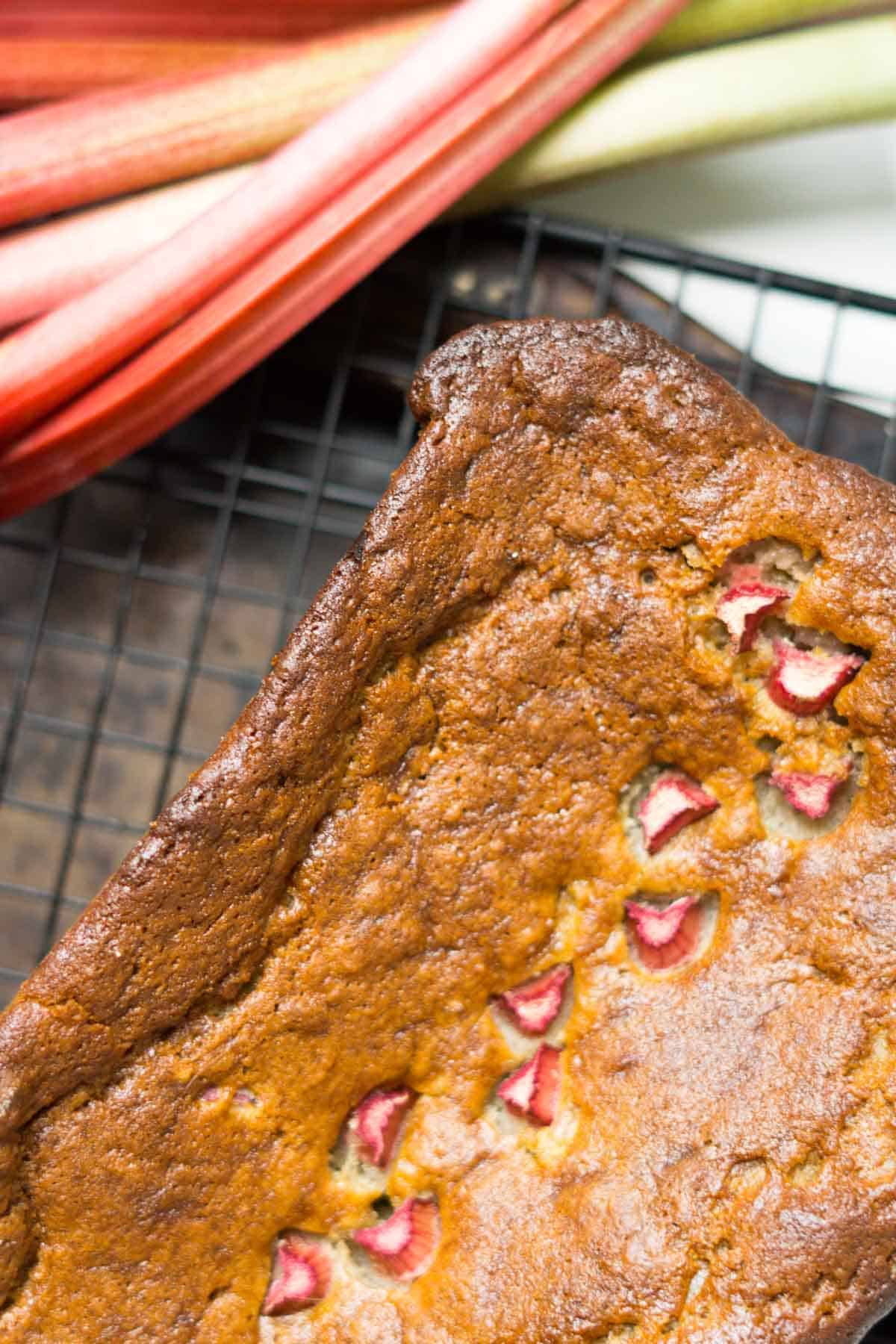 why it’s a smart choice

I’m not going to pretend that this is an uber healthy breakfast option or anything. If I were to rank this recipe I would say it’s a healthier option for a dessert but more of a treat for breakfast.

Each slice will give you half a serving of fruit, which is pretty decent for a dessert! But if you’re enjoying this for breakfast, stick to one slice and fill up on a hard boiled egg and some more fruit on the side 🙂 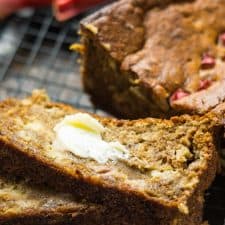 Print Recipe
An incredibly moist banana bread whose sweetness is balanced by the tart addition of rhubarb.
16

Do you have more rhubarb than you know what to do with? Try these rhubarb breakfast parfaits too!

Previous Post: « Is Coconut Oil Healthy?: an overly complex answer to an overly-simplified question
Next Post: What the Health Review – the good, the bad, and the ugly »